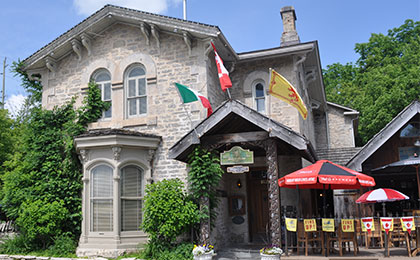 The Breadalbane Inn is a destination unto itself. With seven deluxe suites and four vintage suites, all beautifully appointed rooms feature period furniture, as well as private baths and showers. Some rooms feature fireplaces.  The historic Inn includes two of Fergus’ most popular dining spots; the Fergusson Room Pub and the fine dining establishment known as Scozia. Considered one of the finest examples of Scottish architecture in town, The Breadalbane Inn (bruh-DAHL-bun) was built by George D. Fergusson, son of Adam Fergusson, a co-founder of Fergus. Take a step back in time in the heart of Fergus.